Ziggie Obidzinski lives in Marine City, Michigan on the bank of the St. Clair River.  It all started when his Grandfather John Karp took him fishing on Lake St. Clair when he was 13 years old.  Ziggie caught his first walleye that was 3 lbs and has been hooked ever since.  For the next 21 years till his grandfather passed away in 1971, Ziggie hung around and fished with him at every opportunity that was available.  During the times they could not fish, they would be in John’s garage or basement working on how to modify existing tackle or making new decoys, lures or developing a new technique to improve their harvest. 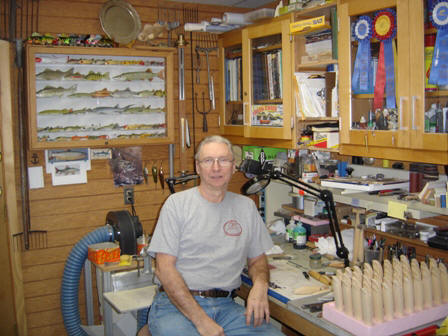 When Ziggie retired from General Motors in 1999 and needed something to occupy his time, he started carving ice fishing decoys for his personal use and to compete at the various carving shows in Michigan. His decoys were very successful and they won many first place ribbons and best of show awards at both the World and National Fish Decoy Championships. During this period many of his Muskie fishing friends were asking him to repaint their lures. Because of this he decided to design, test, and craft his own custom lures. In 2003, he made approximately 150 lures in various sizes, patterns, and colors; jointed and straight. He passed them out to his fishing friends and they were very productive in catching some very large muskies that year. Now the word is out.